Love your hotel linen and it will love you

At CLEAN, we know how hard housekeeping teams work to prepare rooms for guests, which is why we do everything we can to support them by providing high quality, clean linen and towelling. 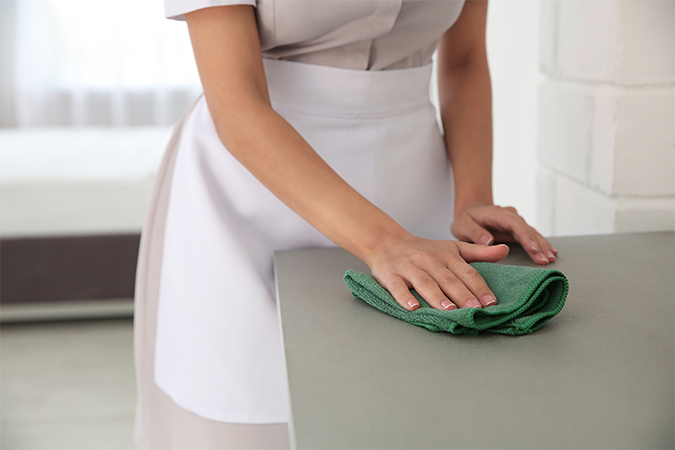 We’ve worked within the industry for 130 years so understand how crucial it is for housekeeping that linen is supplied in a pristine condition. Time needed to change a room is precious, so the last thing a housekeeper needs is to find a hole or stain in a sheet on a bed they’ve just made.

Often busy housekeeping staff are unaware of the damage their – seemingly harmless – actions can have on linens and towels.

When time is short we appreciate it’s tempting to grab a pillow case to polish a mirror, or wipe up a spillage with a towel – but this ultimately has a detrimental impact on its long-term quality.

Friction from wiping and polishing can damage linen, wearing it out unnecessarily. Chemicals used for cleaning, as well as oil and water are also hazardous for linens, while using them to wipe down areas such as toilets and baths is unhygienic.

Similarly, the weight of placing all used lined into one duvet cover can stretch or rip the fabric and poses as a trip hazard when left on the floor.

It’s also crucial to store linen correctly. Keeping it on the floor for example, means it could get dirty before it even makes it to the bed, and tying knots in sheets is a surefire way to weaken the fabric.

Having a well-organised linen cupboard on-site, with adequate shelving and step ladders, so staff don’t have to stand on linen piles, will help to maintain clean linen. Keeping that linen cupboard locked while unattended will also avoid anyone grabbing clean linen for purposes other than making beds.

Linen misuse can easily happen often without people realising, but it is also just as easily avoided. With just a few small adjustments like having the right cleaning apparatus available and training housekeeping staff to treat it in the right way, hotels will have better quality linen and towelling, staff will reduce the number of beds they remake and have better productivity and team morale, as well as avoiding any potential charges for misusing linen.